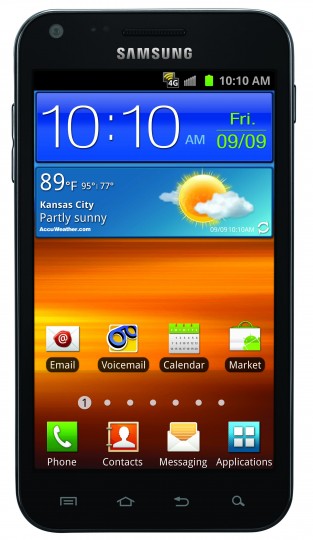 Samsung has finally announced that the carriers in US will be selling the Samsung Galaxy S II almost after 3 months of European availability.

Sprint’s Samsung Galaxy S II Epic 4G Touch Handset does not have a slide out hardware keyboard. The difference between the Sprint’s Galaxy S II Epic 4G and the European SGSII is the screen size. It is equipped with 4.52 inch Super Amoled screen with resolution of only 800*480. The AT&T and other versions come with 4.3 inch display

The Sprint’s Samsung Galaxy S II Epic 4G Touch Handset sports four capacitive Android keys unlike the European version that has 2 capacitive keys and one physical key. Moreover, it is not slim with rounder edges compared to the European model being 9.59 mm.

The Galaxy S II Epic 4G Touch Handset is powered by Exynos 4210 SoC including 1.2 GHz Dual Core Processor and ARM Mali 400MP GPU. It is packed with 1 GB RAM and 16GB internal memory. It will be running on Android 2.3 Gingerbred along with TouchWiz UI, can be used as a 3G/4Gmobile hotspot for up to 8 devices and supports Sprint based applications. Media hub service is offered along with Swype and desktop over WIFI. 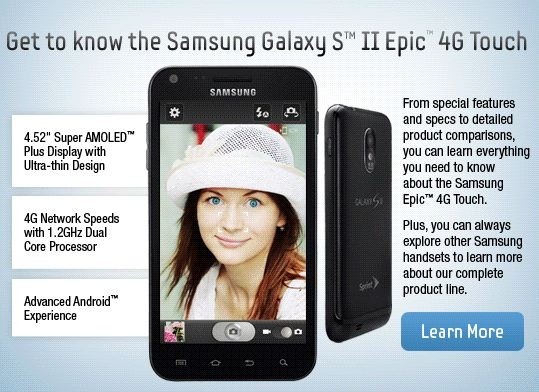 This handset features 8 megapixel camera along with dual LED flash, auto focus, smile detection, panorama and video recording at 1080p full HD resolution and 2 megapixel for video chatting. It boasts of six axis motion sensor and touch and motion gestures. With this nifty feature one can just flip the smartphone to put an incoming call on silence and to zoom in and out one just needs to tilt the phone.

There is also WIFI calling and hardware encryption internal and external. WIMAX network by Sprint is also supported by this phone. Some enterprise features that are offered are Full Exchange ActiveSync support and Cisco WebEx Mobile Conference Software. The handset is powered by 1800mAh battery. 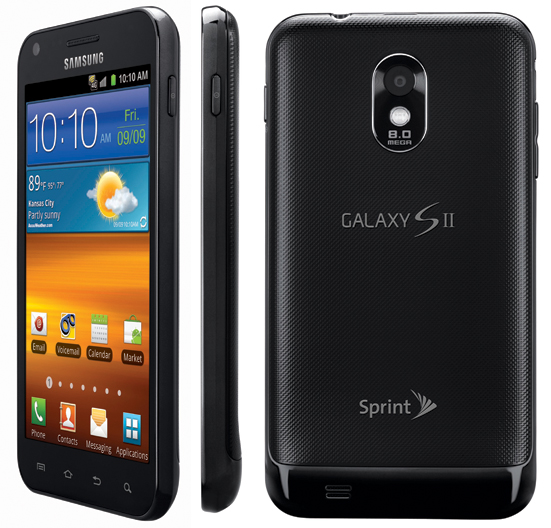 An HDTV adapter and a dock will be offered  by Samsung for viewing HD content on Televisions using handset.

The Samsung Epic Touch 4G is available on a 2 year contract priced at $199.99 and will hit the market on September 16th.